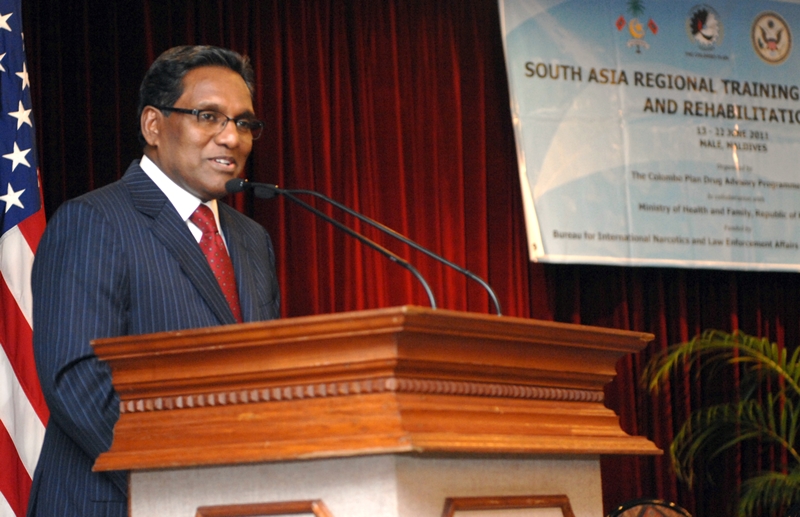 Vice President Dr Mohamed Waheed has said, in the Maldives, convincing people that drug use was a social and a medical problem remains a huge task.
Noting that, although it was easy to see drug use as a criminal issue, he said “if you really want to be serious and help this people to recover and to be reintegrated in to our communities, then we have to see from a social perspective.”
He made the remarks at the opening ceremony of South Asia Regional Training on Treatment and Rehabilitation for Treatment Professionals organized jointly by Colombo Plan, US Bureau of International Narcotics and Law Enforcement Affairs and UNODC.
Speaking on the drug issue in the South Asia region, the Vice President emphasized that drug use was directly related social, political and economic issues in the country.
He said drug use has become an increasingly “important issue in our region and public policy has a lot to do with that – distribution of wealth, condition of poverty, degradation and social marginalization all contribute to worsening drug situation.”
“Wherever it is, people resort to drugs because they want to escape from pain, from poverty, from suffering,” he added.
In his remarks this morning, the Vice President referred to the recommendations of a groundbreaking report on global drug situation by the Global Commission on Drug Policy.
He said the report that calls for major reforms of global drug prohibition regime, also echoed the calls for strengthening of services for health and treatment of drug users, which he said was the most important recommendation of the report.
The training workshop that began today in Bandos Island Resort and Spa will be held from 13 to 22 June.